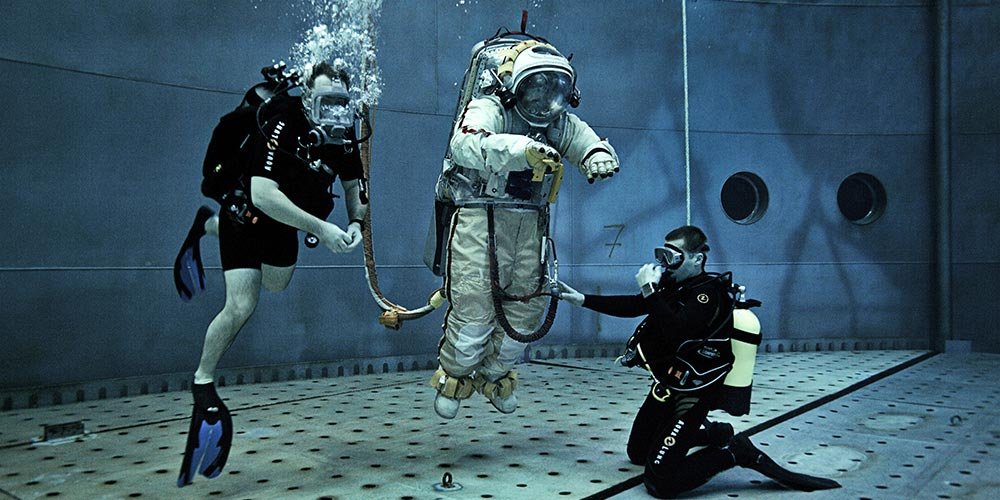 Ever looked up to the stars and wondered what it would feel like to float in space? Well, now you can experience it for yourself at Star City, the ex-Soviet space-training centre just outside of Moscow. For a cool €12,500 (a lot less than it would cost to be blasted into orbit for real) you can undergo an authentic cosmonaut training session – not in the vacuum of space, but immersed in 12 million litres of water …

Located within the formerly top secret (and still guarded) Gagarin Cosmonaut Training Center on the outskirts of the Russian capital, the Hydrolab is a gigantic ‘neutral buoyancy’ water tank that offsets the force of gravity that causes objects – or people – to sink or rise. It’s the only effective way of simulating weightlessness on Earth for extended periods. “It’s very close to being in open space,” explains Andreas Bergweiler, mission director for Space Affairs – an agency that organises training sessions at the facility. “The only thing that is different is that in space, you are in a vacuum and there is no atmosphere around you that you can /feel/. Here, you have the mass of the water around you, but the movements are just the same.”

First up, you’ll don an authentic Orlan space suit – a 100kg-heavy piece of kit designed for the zero-gravity of space – before being lowered into the pool and guided to the full-size models of the International Space Station’s Zvezda Service Module and the Soyuz Spacecraft submerged below. There, you’ll be hooked up to the ship’s oxygen and comms system before carrying out authentic ‘maintenance work’ on the module’s exterior. From this point on, you’re in space. But beware: one false move, and you could be floating off into oblivion … or at least the other side of the monstrous tank. “You have to physically drag yourself around the module one hand at a time,” says 49-year-old German artist – and aspiring astronaut – Michael Najjar. “But that’s the really cool and fun part. It's incredibly exciting, not to mention challenging, to be weightless in such a suit.”

Michael Najjar during training with the Orlan spacesuit, Hydrolab GCTC

You’ll need a PADI scuba diving certificate, a certified health check and a visitor's visa for Russia to be able to experience working in ‘space’, not to mention a good level of physical and psychological fitness… Underwater cosmonaut training is fun but gruelling work – the heavy suit will test your strength, while the intense sessions – which can last as long as seven hours – will stretch your stamina and endurance (a regime of high-intensity cardio training is recommended to prepare). It all adds to the authenticity, though. And as far as following in the footsteps of Yuri himself, it’s an exclusive adventure that’s hard to beat.

Claustrophobics need not apply: “It’s not good if you feel like you're a tuna in a can,” says Andreas Bergweiler. “Take a deep breath, relax and keep your heartbeat down with breathing exercises. Learn to control your body and mind before undertaking this experience.”