Nothing for weaklings | Space Affairs 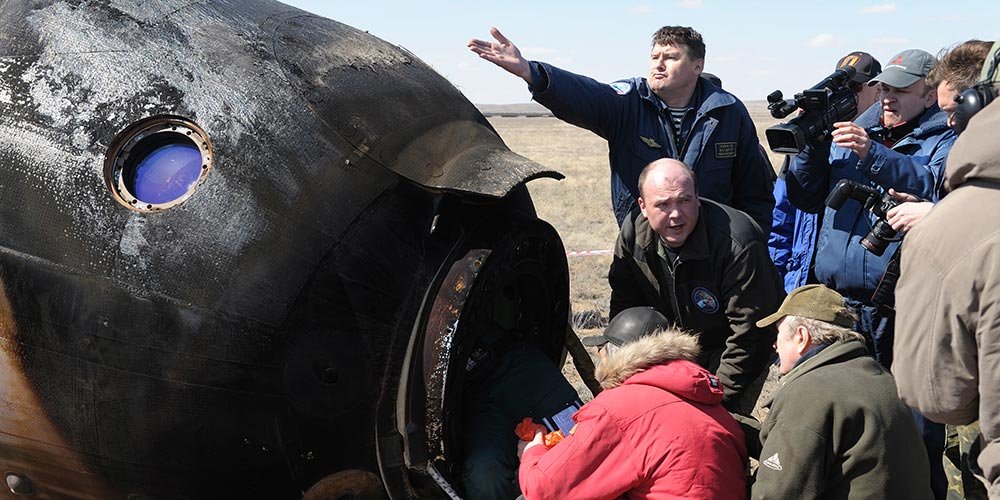 The hunt begins at midnight. Four jeeps are waiting in front of the hotel, the district heating pipes of the plaster-crumbling terraced house across the street meander in their spotlight. It is cold in Kazakhstan, in Karaganda, 200 kilometres south of the capital Astana, there is still frost on 8 April. But there is only trembling excitement here: Will we see the Russian Soyuz capsule falling out of space in 13 hours?

Roskosmos rescue forces in the middle of the Kazakh steppe

The hunted still float 350 kilometres above sea level through the "International Space Station" (ISS): Commander Yuri Lontschakow (44), board engineer Michael Fincke (42) and space tourist Charles Simonyi (60). While we leave 120 kilometres of steppe per hour behind us in our jeeps heading southeast, the three cosmonauts race around the earth at 28:000 kilometres per hour - once around in 90 minutes. But it gets tricky on the way back. So that at least one risk can be excluded, the landing of the Soyuz mission TMA 13 was postponed by one day. This is because the original landing area in northern Kazakhstan has become marshy due to the melting snow. Now the Soyuz will land in the south, between Karaganda and Scheskasgan. Simonyi will be pleased about the delay - his stay on the ISS will now cost him less than three million dollars a day, 35 million for twelve days.

After a six-hour drive, we leave the paved road and stop at a clay court covered with frost. Shift changes in the sky, the sun replaces the full moon, somewhere in between the three cosmonauts are preparing the Soyuz for take-off. Left, right, front, back: the deserted steppe. Up there: the vastness of space. But suddenly four blue monsters appear large amphibian vehicles off the ground rescue force. The engines hum Russian rustically, roof hatches open, and the 20 men of the rescue team line up in front of them. In front of the brake lights, the smoke of their cigarette disco lights up red. It becomes official: The bosses put on their caps with the wide brim and put up the badges of their rank.

As the amphibious vehicles accelerate, our jeeps are no longer audible. Past white salt spots we bump across the country to the landing area. Andreas Bergweiler looks into the rising sun, tries not to knock his head on the roof of the car. The 44-year-old former regular soldier is washed with lots of water: Cambodia, Somalia, Bosnia. Today he is committed to European space tourism. He left some nerves to organise the tour to the capsule, his inner tension can still be felt: "We're almost there", he mumbles, "now all we can do is hope that everything goes well". If it came to an emergency landing, we wouldn't know anything about it.

Because of the ballistic re-entry, as happened with the missions TMA1, 10 and 11, the landing area can shift by hundreds of kilometres. In 1975, the capsule even landed 80 kilometres behind the Soviet border in China. The problem was the separation of the three modules of the Soyuz spacecraft. The service module brakes on the way back to Earth in three pieces. The orbital module carries the payloads. And shortly before re-entering the atmosphere, these modules are separated from the landing module, i.e. the capsule, and annealed. If the separation is severe or if the control software does not work correctly, the spacecraft automatically switches to a ballistic mode, and the capsule enters steeply. If the angle is too flat, the capsule hops on the atmosphere like a flat stone before penetrating it.

Charles Simonyi, Yuri Lonchakov and Mike Finke after the landing

The engines of the amphibious vehicles fall silent, the wind purrs in the undergrowth, a squirrel mouse whizzes through. Now we have to wait. And hope. Pressing our thumbs alone won't help, so we talk for minutes about the well-being of the cosmonauts and drink a Russian national drink. Shortly afterwards the head of the ground rescue team, Sergei Sergeyev, distributes the official patches for the Soyuz mission TMA-13 to his team. The 47-year-old has been with the team for 15 years and has witnessed over 60 landings. But he says, "Every time we go hunting as if it were the first time." Inside his amphibious vehicle, he proudly shows on the wall the signatures of the cosmonauts he has already chauffeured: Gidsenko 2002, Duque 2003 and Simonyi after his first excursion in 2007.

It's a quarter to ten Kazakh times, and while Sergeyev is still talking about the rising adrenaline level, Charles Simonyi already has the hormone in his blood: he's squatting in the Soyuz capsule, 350 kilometres above us. Ten minutes later, metal springs repel the spaceship from the ISS. From now on, it's downhill: control nozzles direct the Soyuz into a deeper orbit, and while it orbits the Earth almost twice, both Sergeyev and Bergweiler become restless. Everyone has to get into amphibious vehicles or cars. "Safety precautions," says Bergweiler. "If the capsule threatens to fall on our heads, we can drive away faster".

While we sit nervously in the cars, the Soyuz spaceship ignites the brake rockets at 12.24 o'clock. Just under five minutes later, the service and orbital modules were successfully separated. Now the landing capsule races towards the earth's atmosphere, at the height of about 120 kilometres it gets hot. When re-entering at the optimum angle between six and seven degrees, the friction causes a plasma to form at a temperature of over 1000 degrees Celsius - speed is converted into heat, the ablative heat shield melts away, radio contact is interrupted. Between three and four G act on the cosmonauts.

We get out of the cars and look into the glistening sun. The blue sky is flawless - except for a small spot. "There! Bergweiler does not scream, he remains in the rigidity of fascination. A double sonic boom thunders over the steppe and announces the three people from space with a dignified volume. The first parachutes slow the capsule down to almost 300 kilometres per hour. It lies diagonally in the wind, with the smoke flags from the parachute lids blown off it resembles a jellyfish in the sea. We blink past the sun until our eyes hurt, then the main parachute opens, and the Soyuz capsule floats at 25 kilometres per hour towards the Kazakh steppe soil. "Now everything is fine", says Bergweiler relieved, "now the main glider is open". And Russian helicopters are already climbing the horizon. Two of them accompany the floating capsule - but where to? Behind the low chain of hills?

"Full throttle! Now Bergweiler screams after all. We rush through the steppe while staring at the capsule our heads hit the windows. The Kazakh steppe is a good landing area because it is big and empty. But in front of us, there is a railway embankment and a road. On it a truck, the driver will be surprised: Only 500 meters away is the little-charred thing that just fell from the sky, surrounded by a bustle of helicopters and people.

20 meters from the capsule, our driver pulls the handbrake, and we walk to the barrier. A red and white striped plastic band is stretched less than three metres from the capsule. And there it lies - and stinks. The thick asbestos layers glued with resin are completely charred. Only the underbody is undamaged, here the ablative heat shield was blown off by the brake rockets, which reduced the speed to 7.2 kilometres per hour a few metres before the impact. In front of the disposable capsule, Commander Lontschakow is already sitting in a rocking chair grinning the grin of a happy man. Like his colleague Fincke, he was on board the ISS for six months. Soon the capsule, which is only 3.5 cubic metres in size, will be freed, and Simonyi will complete the trio. They are well, it was a model landing. Doctors dab the sweat off their foreheads, measure their blood pressure, wrap them in blankets - and the three from space grin, grin, grin. The hunt for space travellers has come to a happy end.

Last year the landing of a Soyuz TMA-11 almost ended with a catastrophe: The crew was nearly burned. The return of a Soyuz capsule from space is always an adventure.

Dennis Buchmann experienced the recent landing of three cosmonauts in Kazakhstan. She announced herself with a double supersonic bang.

Returning from Space
Show All Articles