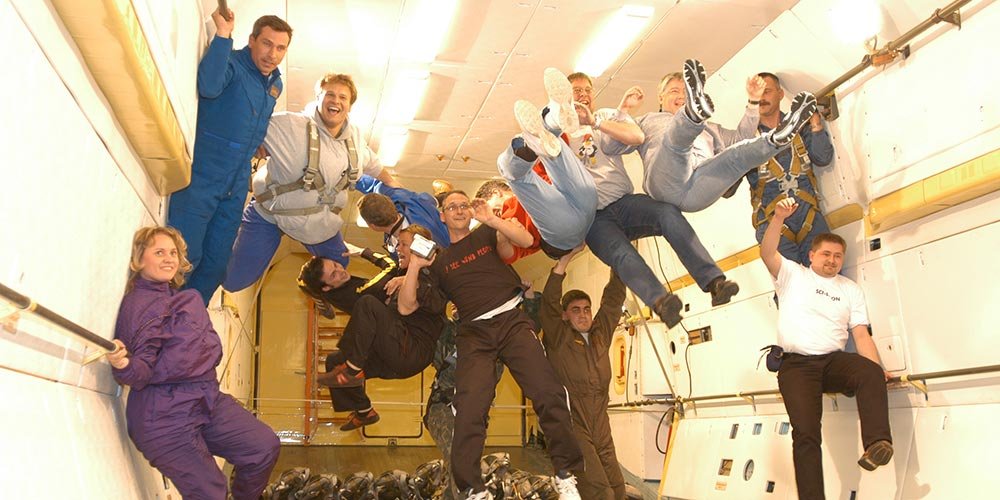 The Zero-G Flight will always remain in our memory. It is an exceptional memory. What does someone think on the way during such an experience? On the one hand excitement, on the other satisfaction. However, however, the slogan is: "I have done it!"

That weightlessness is not to be seized nearly into words. The body does not know this feeling. I did not have during these phases a time feeling, reduced orientation, felt hardly G-forces. Besides, the sense of endorphins overcame me. The body was in this moment full of lucky hormones. Most of us began to laugh also and to shout, everything in a positive sense.

However, always a powerful force went to that ahead (climb). On the bottom of the aeroplane, I have had a better feeling than sitting. After the 7th parabola, I sat with my back in flight direction. Before this, my instructor has turned me into the air like a windmill several times. Now we expected the rising of the machine again. That was the moment, where my blood-cycle was not very well! A unique feeling in my feet and my hands ... and to choke a little bit actively.

Then, in the form of a knocking hand on the shoulder, the release came. The instructor stopped the flight. (bad weather). Also, the descent was pleasant, not straight. Many turbulences brought the stomach in excitement. However, I hold on. My wife Ilona did not have to feel anything from these things. She has had no ill feelings and no problems - she is even a woman!

Thank you again for this experience. Perhaps, we see us still for another adventure.

Now, I have the chance gradually to understand, what this adventure was for a unique time. I want to thank all of you entirely, that you have given me the possibility, which I would otherwise never had.

This flight I give to my wife from my heart, and I have to try to explain, what for an entirely unusual experience a Zero G Flight for her could be - but she could not understand my words. Everyone must have just this experienced feeling, before that - no chance to describe.

Which I regret a little bit, otherwise on the other hand I know, that there was waiting for something a great thing of us. On the other hand, we began the journey, however, more with consciousness, to make a short time trip to Russia, to visit any museums, and beside this- we have to fly on board an Ilyushin 76 a handful of parabolas after we arrived onto airbase, this conscious to me like a hurricane!

I enjoyed this time, each second before the flight, hoped, this time, has gone not so fast past around me, I watched the ground personnel, I want to see and recognise all things - so I have later a better chance, to remember all things, like in a film.

I thought about how it will be, to fly with this machine parabolas. I have had amusing-proves no fear, however, somehow a feeling, which I cannot describe afterwards. I believe - and I expressed that already here at home - after such an experience, somehow, somebody is another human. I do not find an end if I think about my particular adventure, and in my head, I'm flying one parabola after another.

So, I should close now and thank you again entirely cordially. We could not find a better "space guide" and such so an experienced man like Andreas Bergweiler. He has shown us another world with his extraordinary service.
Unbelievable!