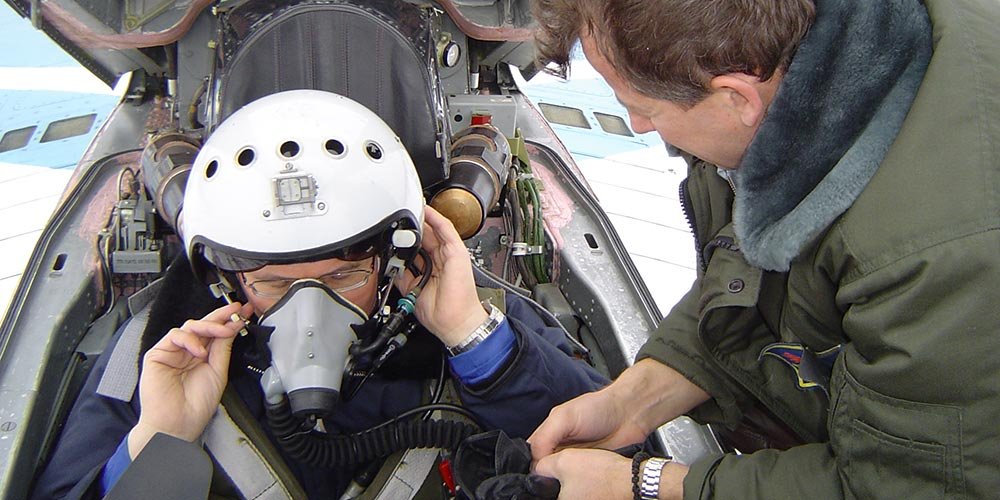 After nearly a year, many oral tellings and DVD experiences with friends and acquaintances about my "Flight with the MIG 29", I must now, at last, write my written report what I left something behind me. Ultimately, it is also a need for me to thank once again Space Travellers - especially Andreas Bergweiler - and all who have contributed to the success of the trip. This already tells that my wife and I were delighted. The organisation, local support, accommodation, food, hospitality and flexibility have impressed us.

At my home, there is now a certificate of my flight with the MIG-29UB "Fulcrum" with test Pilot Yuri Polyakov of the airbase of Nizhny Novgorod.

After about 3 months of preparation, I could have expected the departure from Slovenia to Russia. After arriving in Moscow, we took a shuttle service onward to the journey to the place where the cradle of the MIG is. We made a private hot dinner before we arrived at Nizhny Novgorod where we were housed in Alexandrovsky Garden hotel, one of the best hotels in the city. We received, of course, the necessary instructions for the next morning of the flight day. After a sauna, tea and a good night's sleep, you would never know if you will see the city again after this adventure. On the next morning, we saw the first time the town at Oka and Volga at daylight.

With a friendly reception, I met my pilot. I do not know why, but I had imagined a different warrior of the skies. We get very quickly warm during the briefing. The health check was getting very pretty quickly. All the people in the room were a little bit surprised that I did not want to cross the sound barrier, I wanted to have a daring acrobatic flight! If I was here, I wanted to feel this all! The weather was not so right above the airbase, the clouds hung in there at a 300 feet level. So, Yuri, my pilot could not promise anything that I had imagined. Also, nobody would know how my body would react on this aerobatic flight! To see the "Mashinka" (the MIG-29) alone on the airfield was SUPER! To listen to her engines and to see in the back mirrors as she thrown away with her trust the mountain of snow behind her, to see the tension of the airfield under snow and all of that ... it blows away my mind!

As I felt the afterburner, my feelings I can't describe! I thought I'd just get 'wing mad'!. After we made the takeoff, we started first with roles, and we crossed the clouds. This was followed by 45 minutes flying acrobatics at its best, the feelings that I had wings come back to my mind. Barrel rolls, air circles and loops, Cuban 8, 5 bells (Belly) in a row. Smallest horizontal circle with tremendous acceleration!

Get into the MIG-29 cockpit!

Orbit ß = 70-75 °, pull up, dive, loop, inverted flight, vertical stall, flight past H = 15m, V = 200-800 km / h, H = 15 - 3000, + 7.2 G, - 2 head G, weightlessness, something harder ... after each maneuver I asked Yuri, if we go on and without my consent, we have flown in the next figures. Actually after 30 minutes can be an end for me. From there I felt no longer optimal, and for a short time, I open the valve for oxygen. That made me feel good, and so I went with Yuri continuing through that what he has planned. A few minutes I was able to control the machine by myself! And I've noticed that the device is very obedient. I've flown a loop, and two loops with Juris corrections brought about. Afterwards, Yuri has brought the machine under the cloud cover, and the board computer told me over the speakers 300 m, 200 m, 150 m and then the announcement "OPASNAJA VISOTA!" - (Dangerous level)! Then came 100 m altitude and then it was still in the cockpit just a beep was to hear! We rushed to the "edge of a knife" of below 50 meters with afterburners turned on. The observers still on the ground closed their ears and take shelter by themselves! And again in the clouds and then the second approach with less than 15 m altitudes, nor a circle and then came the buttery soft landing, with dropping down the speed by a break-parachute.

Vladimir with Sokol's Oleg Fedorov after his flight

I came out of the cockpit with a red face, a bit shaky on my legs and soaking wet! Big applause from the director of flight operations, the ground crew, all companions and from my wife! Photos and quickly into the car. After showering and changing clothes, I received my certificate and was of course formally invited for further adventures, which I allow myself maybe in the future. With an illustrated book of Slovenia, I thanked my pilot!

After arriving in the city centre and a small walk in the winter air, I was feeling very well after the Vodka came to the restaurant.

That night I slept very well, of course. The city tour with a visit to the monastery was like a typical Russian winter wonderland. Late in the evening, we found ourselves near Moscow, where they took us to the hotel.

Vladimir with his wife and test pilot Yuri Polyakov

The next day was full of history, science and technology. We were guided from a hero the Soviet Union, pilot 2nd World War II, through the Monino Airforce Museum. So we got an impressive insight into the history of Russian military aviation. The lunch we took in Star City has one it was more of a banquet with many Russian specialities. A young officer, cosmonaut candidates, led me and my wife and our two interpreters, one for English, a German, to the space station Mir, where we were allowed to take place in the interior. Everything was explained to us professionally. We saw the pool for the training of the operations in space, the centrifuge, the equipment for cosmonaut and learned so many little "secrets" about the heroes of space. The evening with an extraordinary sound in the Uzbek restaurant in central Moscow, where a typical dinner was ordered for us. I can well imagine why the cosmonauts relax after successfully completing their mission there. Traditional music, belly dancing, colourful carpets, silk, linen, pretty women, costumes, water pipes, vodka...

I felt like a fairy tale of 1001 nights. My flight was a reality, a dream that I've met me. I thank all who have contributed to the success of the most excellent adventure of my life!

Thank you for all kinds! Thank you all for everything!