My flight to the edge of space | Space Affairs

My flight to the edge of space

My flight to the edge of space

by Robert Braunsteiner (A) April 2005 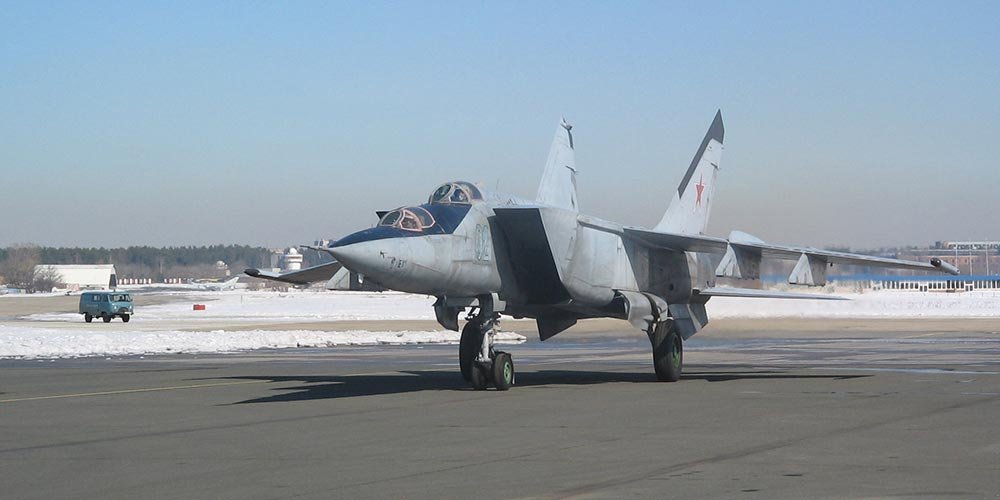 After my preliminary medical investigation, a pressure suit was tightened up by two nice Russian ladies, and I was fastened with an oxygen mask in hand into the cockpit of a MIG 25. Now it came me consciousness - now it begins, the adventure of my life.

It was a clear radiating beautiful day, at the beginning of April in Russia. I was on the Zukowsky air base close to Moscow. The air was fresh, and the landscape was a little bit snow-covered. It was cold. An older man of the jet team bent over me and began with a ratchet to fasten my seatbelts until I was pressed into the seat. A few tubes to stuck on my g-flight suit, and after that with a friendly smile of the man, the cockpit fall with a loud clicking downward.

Now it was certain, no step back! The turbines were started and began to come slowly on rotations. The supersonic jet sat down after a short time in motion, and we rolled over the runway at our initial position. The track was very long, the length I could not estimate, but it was enough runway to the horizon. The flat tundra-same country was before me with snow in the fields, where I ever looked. Tensely I waited for the take-off. The left engine howled on, and I could read on the instruments onboard as it reached 100%. Then the same happened to the right engine. The machine trembled under the immense load, but it did not move a centimetre, gear was on break and still blocked the jet on the runway. A jerk drove it through the jet, and then went loosely. First only slowly, but after one-second one already I felt the tremendous thrust of those two each 18,000 HP of strong engines. The runway began to run by under me. It pressed me in the seat, and my eyes moved excited back and forth. I tried to process the impressions, but after a few seconds the jet has arrived a lot of hundreds of kilometres of speed and takes off.

The strain remained as the acceleration, which was unbelievable, and pressed me into the seat. Already in the climb, we broke through the sound barrier and without afterburners. No bang or otherwise any change was to be heard, only the armatures indicated that we had reached Mach 1. The aeroplane stabilised now on an altitude of 10.000 meters. The strain yielded and made for the overwhelming prospect place. It was a clear day, and I could see rivers, lakes, cities, and mountains up to the far horizon. Now the pilot controlled the machine into a loop and began the climb. The radius became ever smaller, and the afterburners ignited.

Trough the MIG-25 drove through a jerk and went in a spiral steeply uphill. The G-forces began to pull up again, and my physiological feelings were not such right, in my brain was the beginning of a little bit of fear. The jet pushed 15,000 - 16,000 meters upward without consideration. Mach 2 exceeded and ever continued to itself, screw the supersonic jet into the sky. Over my head, it became more darkly. The sky lost its colour and yielded in different emerald to blue tones of the darkness.

With 20.000 it became black and the sun radiation sharply. A feeling, which an astronaut must have with a shuttle flight, flowed through me. A trembling hell machine under my seat into the dark sky board itself, under me the soil less depth, as well as the earth by its edges one Earth's curvature to clearly, I could recognise. My view fell on the instrument of the altimeter that merciless turned and now already 22,000 meters indicated. But there was none hold for the MIG 25. The pilot set the jet straight, and with extreme power, he pushed the aircraft steeply, nearly perpendicularly into almost the vacuum forwards up to over 24,000 meters.

Suddenly the engine noises had disappeared. It was as if we would have left Earth and would have penetrated into the vacuum. I controlled the armature of the engine achievement; however, these indicated still 100 per cent. Until today I do not remember if I have had a pressure problem with the ears, or the sound became quieter, but the feeling was overwhelming. While the machine was located steeply in the air and broken from its 3000 km/h, I feel weightlessness. Over me, into the black sky, there began something suddenly to sparkle. Dozens of stars blinked in the dark sky. Although I often looked from the Earth into the air, such another view I did never saw before. Carefully, I groped with my hand the visor of my helmet and opened it carefully. I wanted to see the Universe with my own eyes. The impressions overwhelmed me and for a short instant time, the time stood still. The Sun behind me, and I looked into this direction. Caution-half I closed my visor again. It expects me not as a large yellow disc flickered as on earth, but I looked on a star. Sharply white and rather sharply circumscribes. Since these seconds my world view changed fundamentally. Over me this sharp white star and under me the blue round Earth and the terrestrial atmosphere, this coated the Earth like an emerald.

This feeling must be of the crew members of the International Space Station; I thought about it. The emptiness of the Universe, the smallest thinking of our existence, also, the difference between light and shade, it’s different than everything I have seen on Earth. Now the jet almost stood still, and the discs of the cockpit began itself suddenly to fit. In this height prevailed more than minus 50 degrees and without friction heat, the glass immediately was icy. From now, we went only downhill. The nose of the MIG-25 lowered downward and began its fall like a stone slowly. A lot of soil nausea I felt in my trunk.

Four, five thousand meters the jet descents and we with it. In spirals, it screwed itself downward. It was a racing downward like 15 minutes with a roller coaster. In a short period, I feel the g-forces again. The G-forces were the largest G-forces of my body during this adventure - 5 Gs. Before I thought of the G-forces, I fought against the weight of my head. With 4 G I had trouble to hold my head straight. Only with the effort, I could see through the cockpit glass, but I also now came at my expense. During the flight, I felt downward like an Astronaut during re-entry.

A quake shaking the machine, the G-forces pulled at my body - to deliver out the laws of nature. Now I was to be sat gladly in the MIG-25 and felt deep respect against all Cosmonauts and Astronauts when they came back from their missions from the stars. On approximately 4.000 meters the pilot stabilised the jet, and we turned from the Edge of Space Flight to a normal combat flight. We flew a few loops and then, my pilot allowed me to control the stick and take over. The pilot said only with a Russian accent: “Robert, it's your machine now, try it”. I took the control stick into my hand and - the supersonic jet reacted suddenly to my command. A little bit upward, a little bit downward, a few to the left and the right. Although I had made myself familiar with the MIG-25, already only with a flight simulator on PC before. I was feeling like a 14-year-old boy; that drive for the first time with his father's car. Sometime later I gave the command to the pilot, and my suit was now completely though-sweated.

Still another low-altitude flight followed over the airbase with greetings to the ground personnel - the MIG-25 wiped with its wings. I was gladly on the safe side, that pilot does not show me a role, because of my stomach - I was a little bit sick. Still another close curve, after that we were set for landing. The landing was butter-soft, and I was exhausted, but my feelings are never known before settled up in these ways. Minutes later I came back out of the cockpit with soft knees. The impressions overhauled me. Only as my pilot and I were shaking hands, and all others congratulated me to this successful adventure - I was coming back to life. It was for me like a close space experience, with which I was allowed the same experience nearby to take off inside a Space Shuttle, flight and landing.

Special thanks still my specialist Andreas Bergweiler, who attend me during the experience and made it possible, that I could do this adventure. I participate a lot of his knowledge of space and spaceflights from his side, and he fulfilled me the dream of my life - because he made it possible:
My flight inside a MIG-25 to the “Edge of Space”.

Robert, an entrepreneur from Vienna, fulfilled himself in April 2005 one of the desires, about which many dreamed: