Fulfillment of a childhood's Dream

Fulfillment of a childhood's Dream 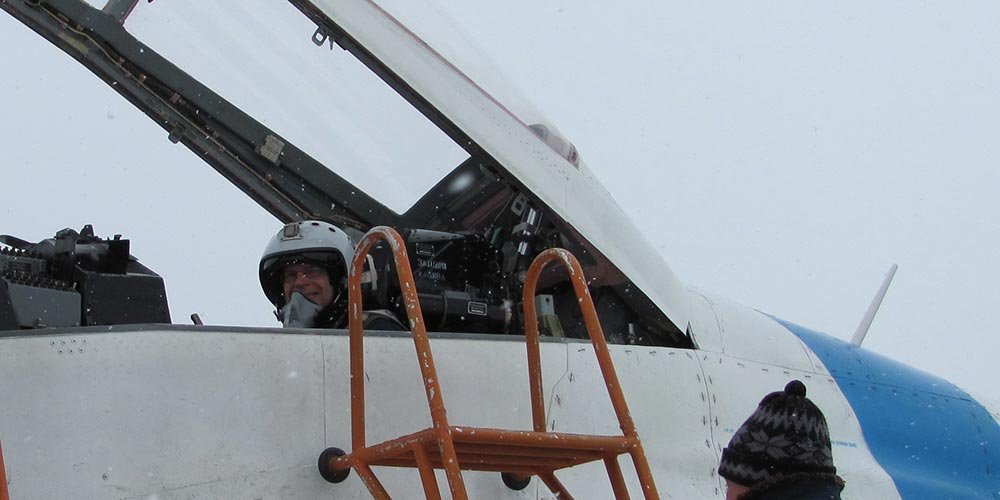 In spring 2009 I contacted first time Andreas Bergweiler of Space Affairs (at this time Space Travellers). I felt that I had now waited with my 53 years long enough for the realisation of my childhood's dream. It fits very well in the private hangings which I went through privately. True to the motto "Now or never!" I was thinking about the realisation of the adventure of my life.

But, Andreas had had it not comfortable with me. In my head arising, on the one hand, the "do it now", but also on the other side the normal fear what I have had uncertainty because I had never dealt with flying a jet and had no idea what is out there and what will come to me.

After several e-mails back and forth and a healed rip from a summer accident, dozens of phone calls, I made in November of the same year a decision: 'Whole Hog' and booked the flight! The anticipation mixed with a dose of uncertainty could now last for three months now.

With the professional assistance of Andreas, I run through the medical check, the visa procurement and other arrangements. All were easily mastered.

Then weeks later, the Swiss machine headed into the direction of Moscow. I was picked up from my personal guide Natalia, and we take the train together to Nizhny Novgorod. There, Oleg Fedorov, Head of commercial flight operations of the Sokol airbase picked us up and drove us to the hotel. After check in there was even a short briefing because of the things what should occur on the next day. At later in the evening I said to Natalia and Oleg good night, and I went to bed with mixed feelings ...

At the next day, it comes closer: After a light breakfast (to spare something into my stomach) I was picked up by Irina, my individual English-Russian interpreter and taken to the Sokol airbase. After the security checks at the gate my nervousness began to rise, what could I expect in the next few hours? It was held a flight briefing with my pilot, and my goal was obvious: I want to go to the edge of space! I gave up the various acrobatic manoeuvres because I was not sure what my stomach would say to this ...

During the check-up routine by the doctor of the airbase, my pulse and blood pressure was significantly increased, and I can't hide my nerves any longer! But, they calmed me down and told me, that all will go very well and that my heart rate and the blood pressure will decrease during the flight. After dressing up with a special suit for the edge of space, we drove down the tarmac where our plane, the MIG-29 "Fulcrum" was ready on the pad! Yuri, my pilot, explained to me all the instruments what I should have a look. I was strapped into the ejection seat very hard. I can't move well with my body, but I should recognise that later on, why!

I put my helmet on and snapped in the oxygen mask. The cockpit was closed, and the controlling systems start with life. The deafening noise of the engines I could hear under the helmet barely. And then, it began to snow! "No worry!", Yuri told me. "The MIG-29 is an all-weather fighter, and the runway is clear!". Then he wanted to know: "Martin, ready for taking off?" and after my "Yes, I am ready!" Yuri released the breaks of the MIG, and we rolled to the runway. It moves very quickly after a little checking on the start position, and after a few seconds later we did the airborne! Yuri turned the jet immediately in a hard, sharp right turn and tested my stomach immediately.

Martin during the MIG-29 cockpit briefing

Then it followed by a surprisingly smooth flight to an altitude of 10,000 feet with a fabulous view. "Martin, take control" I heard in my helmet, and my heart beat increased immediately after some relaxing minutes!. I was able to control the MIG-29 by myself! She was responding to the subtlest movements to the right and left. That was an extraordinary experience to be able to steer a Russian fighter jet! Thanks to Yuri that he gave trust!. Yuri took then the control back again, and we accelerated to the next level of 30,000 feet in altitude. We crossed the sound barrier, but I only recognised it as the needle on the MACH meter crossed the '1,0' mark! There was no 'boom' or something else, I just felt that my blood pressure was decreasing, but this was after the stress from before really good, and I was feeling excellent!

In the next minutes we rose up, we got miles and miles up until we reached the maximum flight altitude of the day: 73,918 feet! The views were stunning: the earth is slightly curved with a blue stripe what is going up to dark in the direction of space. I can't describe it, but I will always remember it! At that moment I realised how insignificant a little man is in the universe!

After a short time, we had already started the descent, there is a limitation up this flight level because of the radiation, which could be very dangerous. Yuri simulated on the way down to the ground attack, but we have to move down to 'easy flight' because I could not do the pressure balance in my ears (greetings to the common cold disease, thank you!). Yuri appeared over the runway of the airbase back only in 45 feet altitude, rushed the Jet down the strip and pulled the jet up! Immediately a G-value of 5 approaches me! I was pressed into my ejection seat as never before!

The landing what followed was very soft because of the snowy runway. Yuri did not have one problem with the snow; I was thinking about my abilities during driving on snow with my car! Thanks to the unique skills of my pilot we made it safe and good! The following graduation ceremony what followed shows the successful completion of this unique adventure!

I followed a visit to the museum of aviation of the Sokol airbase, and my adrenaline level returns to normal. The history of Russian aviation was told by Irina correctly and very well translated from this enthusiastic guy who explained to us anything about flying in Russia and the history of the airbase.

After that adventure, I needed a break! So I slept some hours in the hotel and was picked up from Oleg and Sergey for dinner. I could share my impressions with them, and finished the day in Russian style with Vodka and Caviar!

Thanks a lot, Andreas: you helped me to realise my lifelong dream to come to reality! PS: When I showed my girlfriend some weeks later on the created DVD of my flight, she recognised me that I flew a role - even I had not noticed this during my flight!