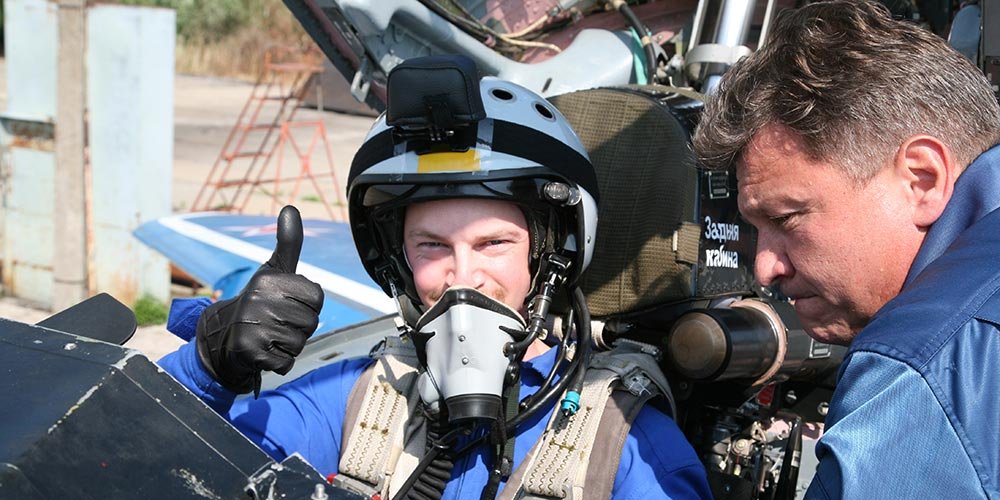 And all the way through school and college I wanted to be a fighter pilot.

As it turned out, this wasn't possible, and I became a commercial pilot instead.

Thomas behind his object of desire, the MIG-29

But the passion for military aviation was still high, so I knew I had to go to Russia and fly the MiG-29 to fulfil my dream.

After 15 years of dreaming, I decided to do it finally. But which agency would I trust with arranging this adventure of a lifetime? I wrote emails to several companies, and immediately it became apparent that Space Affairs was the only right choice.

From some agencies, I had to wait days or a week to receive a standard email, but from Andreas Bergweiler at Space Affairs, I instantly got a long and personal email answering all my questions and more. Space Affairs is all about service and customer support.

You feel taken care of and the centre of attention from the first email and until long after you have come home from your big adventure. Space Affairs has been reachable night and day, seven days a week answering questions, following up and reminding me of things to be done.

During my flight, Andreas was checking on me in real time and couldn't wait to congratulate me later that evening. And he didn't rest for a second until I had received the more than 500 pictures from my day and a downloadable HD video of the flight. He even edited the most spectacular video with highlights from my trip and put it on Youtube for everyone to see. I didn't have to move a finger!

Thomas in low level flight above the Sokol air field

Furthermore, when choosing Space Affairs, you will get the best equipment and the best prices on the market. Two GoPro HD cameras are included in the price, which is super important to capture this particular flight and watch over and over again. Some agencies charge extra for the DVD, an additional camera and a flight suit, which is just an insult to a paying customer. Here all is included. That is YOUR day.

The staff in Russia are equally professional and beautiful people. They pick you up, take you where you need to go, adjust all the equipment to perfection and make you feel welcome and necessary. I don't just miss the adventure; I also miss all the people who were a part of making it a huge success. I am deeply grateful.

I won't go into details about the flight itself.

If a picture says more than a thousand words, a video speaks a million words. So instead enjoy the brilliant video of my flight!

And do yourselves a favour:
Choose Space Affairs!

Thomas Pederson, June 2013
For to be well prepared, Thomas bought the MIG-29 manual three months before the flight on Ebay.
"By doing it, I make that on the correct way!", he mentioned.